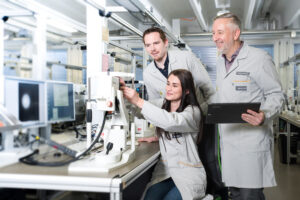 Reinhold Kordesch and Patrick Weinzerl are the new Assembly Managers for Medical Technology and Optical Technologies.

In the search for the best minds, companies are increasingly resorting to their own ranks. Therefore, targeted talent Management is today one of the most important factors in maintaining a competitive edge. The WILD Group also believes that developing and promoting its existing staff is the best way forward. ”We offer leadership programmes for high-potential employees at regular intervals“, explains WILD Human Resource Manager Andrea Gritsch. In recent years, for instance, most group and team manager vacancies in the assembly division have been filled by people from inside the group. The latest examples are Reinhold Kordesch and Patrick Weinzerl, recently appointed as assembly managers in medical technology and in optical technologies respectively. They both qualified for their new leadership positions through targeted training and upskilling, their enthusiasm for the job and trusting relations with their colleagues.

Reinhold Kordesch‘s professional background is typical for the WILD Group. He started as an apprentice in 1988, spent several years gathering experience in various assembly areas and eventually qualified as team manager by attending various training and upskilling programmes. Patrick Weinzerl, too, began nine years ago as assembly worker in optical technologies, working his way up to the position of group manager in almost no time. In addition, he took part in some significant training and upskilling programmes which led to his current position as assembly manager, including the Green Belt and Leadership Programme.

As Andrea Gritsch assures: ”Leadership culture is the result of decades of work. It requires values and attitudes based on equality, yet also transparency and basic democratic decision processes, in which the team and its team managers are involved in decision-making and change as much as possible. A corresponding human resources management must prepare the ground for that to happen. There will be quite a few changes at WILD in this respect, with new HR software being currently implemented. In future, this interactive communication will further improve networking between employees, executives and the HR team of Andrea Gritsch. The new tool will illustrate development opportunities, training and upskilling requests, or other personnel changes with greater clarity and transparency. However, the focus will remain on the proactive role played by the staff.