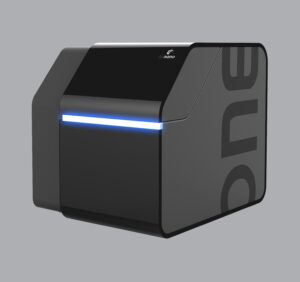 Serial production of top-quality microparts is now possible with the ultra-fast, high-resolution 3D NanoOne printer. WILD helped in the construction of the casing and contributed its optics Expertise.

Manufacturing micro to meso-sized high-performance components is an extremely demanding process that quickly brings conventional 3D printing techniques to their limits. The NanoOne heralds a new era of additive micromanufacturing. For the first time, the patented technology of UpNano GmbH can print plastic components with structural details as small as 100 nanometres. In combination with a processing speed 100 times faster than conventional high-resolution 3D printing systems, this technology also offers the opportunity to work with living cells. These can be gently built into the 3D structure or placed on sterile, prefabricated structures. Understandably, there is an enormous amount of interest from medical research and Industry 4.0, which relies heavily on miniaturisation.

The young high-tech company from Vienna, which received several research and science awards last year, uses the two-photon polymerization (2PP) technique for its high-resolution printing system. This technique uses femto-second laser pulses to harden photopolymers directly in the volume of the material. This allows for the printing of finest structures in different forms and sizes. The company managed to increase printing Speed to up to 20 mm³/h, thus allowing for the economically viable manufacture of microparts for the first time. At the same time, WILD and its WIN partners helped optimise the design of the NanoOne system, so that it can now be used as a desktop system even in the smallest laboratory. This required a redesign of the optical path, causing a chain reaction of modifications. The challenge was managed in weekly meetings, in which WILD coordinated the development steps with the customer, and where new solution approaches from the WIN partner network and the customer’s engineers were devised and implemented. “We are currently discussing the transition of the device into serial production”, says WILD Business Developer Markus Woschitz.

Connecting an incubator to the NanoOne will also allow it to print biomaterials such as combinations of polymers and living cells. This can be used, for example, in three-dimensional in-vitro cell tests, which are increasingly in demand in cell research, tissue regeneration and in the pharmaceuticals industry. The NanoOne has been successfully used at the Medical University of Vienna since 2019 and supplies research departments with micro and meso-sized components.